I started journals with handwritten writings of details of my life in the year 1979. The main reason was that I knew I was entering into a new phase of my life where my experience would be different from all I've ever been through previously. Firstly I was turning to be legally classified as full adult of age 21. However, that wasn't the main reason for wanting to start recording details of my life. Up to that time, I felt I had already gone through a lot in life already.

In middle school, I was involved in all kinds of extra-mural activities in and outside school, especially in the last two years of 1974-75 in a class where positive Feelings were embedded in me to last a lifetime!

Academically I had figured out a way to study and could switch from a pure science stream to the arts stream of accounting, economics, literature etc. within a year in 1976. This was a matriculation program of Australian HSC Higher School Certificate to qualify for a business course at a Victorian state university that would commence early the following year. I would be enjoying free tertiary education in Australia financed by the Labor party government.

With a couple of months' break before the university program would start in Feb 1977, since I knew I was going to be remaining down-under the world for some time, I planned an adventurous trip to explore western Europe! I had not up to that time kept any proper journals. Diaries or notebooks would be what I was using to record brief information of my ongoing busy life! I was good in photography and depended on these visuals to remember my life experiences to share them later online.

Time went by quickly in Australia where I studied, worked and traveled within the country. It was my usual pattern in life until July 1979 in the winter month of the country. It was a big leap into another world I was not familiar with! I accepted to be baptized into the Church of Jesus Christ of Latter-day Saints during the Australian winter that year.

I knew it was going to be a totally different experience for me as I was brought up in a family that didn't have strong religious or spiritual convictions. For me, it was really an exercise of faith or an experiment in my life to see what will happen when I would do my best to follow the tenets of the Church. I've always been grounded with strong logic in my life and despite many opposing views of others in Australia, I could tell that all I've learned from the Church made more sense than what others shared with me who claimed I was following false teachings!

Somehow I had advanced so quickly in the spiritual realm of life that miracles started happening in my life! Being an educated rational person, I felt compelled to record my experiences as accurately as I could. I couldn't believe what was happening to me! Being only a new member of the Church, living purely with faith in Jesus Christ, I received personal revelation that I should serve on a full-time mission of 2 years! One thing led to another in an amazing flow of events that I did write down on paper at first to eventually progress to hardcover books that in later years were shared online when the internet became available in 2005. I was called to serve a full-time mission in my home country of Malaysia and we were required to write daily journals as well as reporting to our mission president with weekly reports sent to him by mail!

My first Online journal when I started blogging in 2005 was focused on recording family events(Familylane) as by then I was preoccupied with family activities. Our two oldest girls were already teenagers with four younger boys who, like the first two girls, came later in pairs about 5 years apart i.e. starting from 1984/85 then another pair in 1990/92 with the last pair in 1995/97. Having a large family with much time spent with them, I was also preoccupied with making a living. I started early as an entrepreneur in the 80s being busy with creations of my mind.(Fastlane) Over time, I was browsing my hardcover book journals that started in 1980 supported by filed paper notes as well, to eventually include them online too as experiences of my spirit.(Spiritlane)

Being trained to be a qualified accountant or CPA, I naturally used the learned discipline to record as systematically and accurately as possible experiences of my life. I was using journals where words of course were used more than figures that I was used to in my accounting reports. In short, I made sure that my journals were more fact-based than being creatively written stories as the world is aware of major corruption in government and corporate bodies, only when exposed or published which explained how my spirituality affected me in the direction of my work. The first real journal that I started seriously in life was nothing compared to my scrapbooks with photos and captions written in the past. Nor would my brief notes written in my years of diaries be of any comparison either but they are still kept in my personal cabinets or archives! 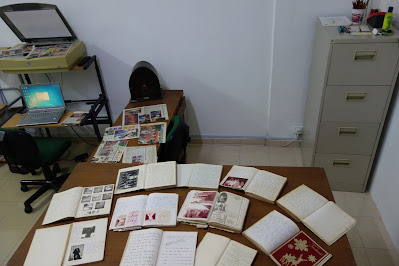 Over time, I scanned more of my relevant paper documents as well as photographs etc. in order to facilitate online sharing or long-term preservation of them.

I believe I have evolved to become an explanatory journalist and years later more analytical as well when my brain algorithms or pattern recognitions became more sophisticated explained in my 2021 Spiritlane post. With the OPT Optimal Performance & Thinking system I had developed, I used it to unravel two of the world's most mysterious subjects of Spirituality(supernatural beings) and Science(quantum physics.) My constant interest and studies of both fields has significantly helped me to better understand Human Consciousness, especially that of my own!

With the mention of my Spiritlane post above, derived from my years of continuous recording of spiritual experiences, I am adding in this post what I have left out which belong to some supernatural or paranormal experiences recorded in my spiritual book journals that I have never shared online yet. The first part of the Spiritlane post covered about my conversion story where from a leap of faith, I encountered many unusual coincidental experiences that I considered miracle blessings I was given to give me a firm foundation of my understanding of the Spirit world. All these happened when I was called to serve a voluntary mission for the Church in my home country. (1980-82)

I will now share them here, as they were never published online before, starting with the city of Ipoh and later on the island of Penang. Ipoh was a miracle story of success I had personally experienced in my mission field recorded here. 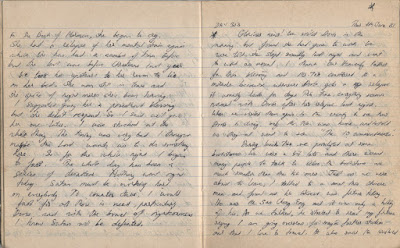 "During lunchtime, we proselyted at some bookstores. We were a bit late and there weren't many people to talk to. Also the bookstores are much smaller than the KL ones. Just as we were about to leave, I talked to a small, thin Chinese man and found out his interest was fortune-telling. He was Mr San Chong Eng and it was only a hobby of his. As we talked, he started to read my fortune saying I am going overseas for maybe further studies and that I love to travel. He also said I'm involved with voluntary work and I like to help people. (Well I did tell him I'm a representative of the church)
All this he predicted without even looking at my palm. He said he was reading my face!! Then he just had a quick look at my palm and said that I belonged to a family of seven. He said I had faced many disappointments in my life (which I didn't think was true). Concerning marriage, he said I nearly got married once but there was a final separation. (I had to think this one over to see if it applied to the brief relationships I had with some girls in Australia!)
He also mentioned that I too, like himself, had some spiritual powers but was not fully developed yet. He suggested that we go to a coffee shop to read my palm more fully. I was more interested to teach him the gospel, so I made arrangements that we meet tomorrow afternoon. He was reluctant to give his address to me but said he'll give me a call in the morning."
Penang
18 June 1981(Mission count: Day 317) 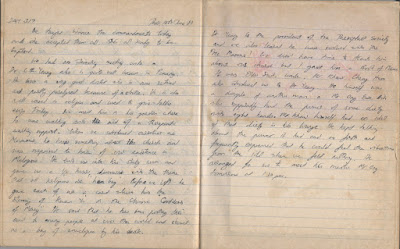 We had an interesting meeting with Dr. C.E. Yeang who is quite well known in Penang. He was a very good doctor who is now retired and partly paralyzed because of a stroke. He is also well versed in religion and used to give talks every Friday. We met him in his garden where he was walking with an aid of therapeutic walking support. When we introduce ourselves as Mormons, he knew something about the Church and was surprised to know of our existence in Malaysia. He took us into his study room and gave us a half-hour discourse with the theme that all religions are "hum bug". Before we left, he gave each of us a card which has the blessings of 'Kwan Yin' or the Chinese "Goddess of Mercy". He said he has been posting this card to many people all over the world and showed us a bag of envelopes by his desk. 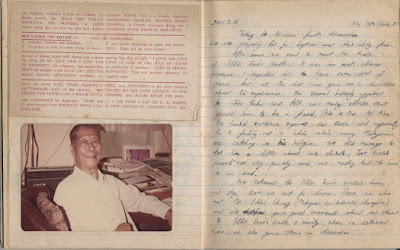 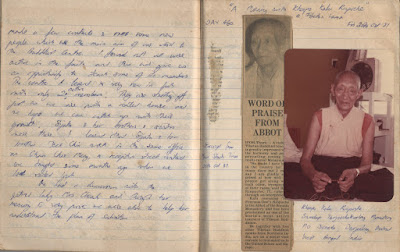 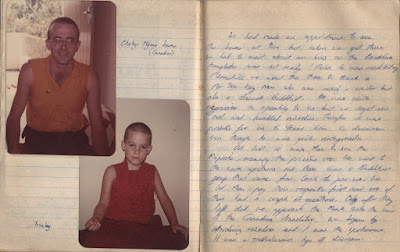 Second photo on the bottom right of the page above:
Trinlay

Popular posts from this blog

A challenge for the Human Race! 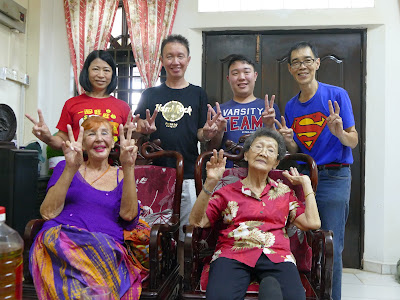 Can we be more loving to create good families, friends and communities? Can we be more intelligent to solve more problems and ensure of our well being in life? Can we be more spiritual to be able to transcend above the weaknesses and sufferings of mortality?  My answer is that we can by increasing our EQ IQ & SQ levels. Yes, we each can be more loving, intelligent & spiritual. We just need to know how. It relates to our Consciousness of the tripartite nature of Man that philosophers of the Western world such as Plato named it as Appetite, Reason and Spirit. In the Eastern World, it is commonly referred to by Body Mind and Spirit by the Sages. The difference between philosophers and sages can be read here. Is Superman a Marvel and/or Mystical hero fighting for the Human Race? Pic 1 Pic 2 Pic 3 Marvel and/or Mystical stories will now begin... Initiated on Sunday 21 June 2020  It's Father's day today and I woke up, not realizing it, but had a mystical dr
Read more 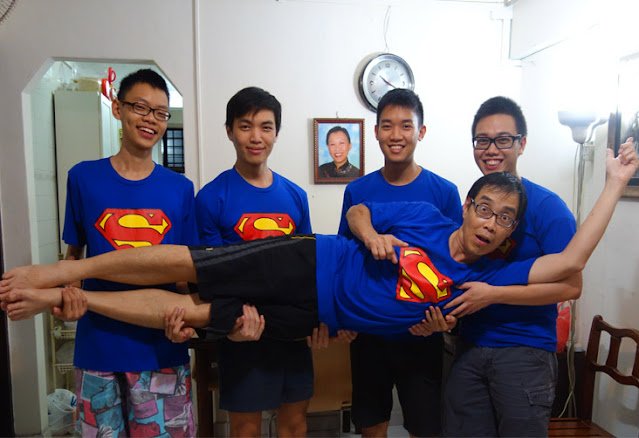 Ok this is pic 3 from the previous post . As stated in the previous post, this photo was included at the start of this website with no idea of why it was included other than knowing that I wanted to share about Mystical and Marvel stories that I've never really written or pondered about other than my own spiritual experiences that occurred after I had joined our Church. Since this webpage was created only today, being 27 Sep 2020 a Sunday, I didn't have strong feelings what to write about all the supermen in the photo above until this.... For some reason, Elder Tai Kwok Yuen's article flashed on my computer screen. When I think of Elder Tai, memories of his visit comes to my mind and I got my journal book out to read exactly what I wrote which was never transferred to my online journals. I will now type on this journal what I had written in the book: The highlight of the year would probably be the birth of our 4th child, Chong Woon Shuan at 11.45pm at the Pantai Medical
Read more